Childhood Onset of Bipolar Disorders: An Excess in the US and What to Do About It 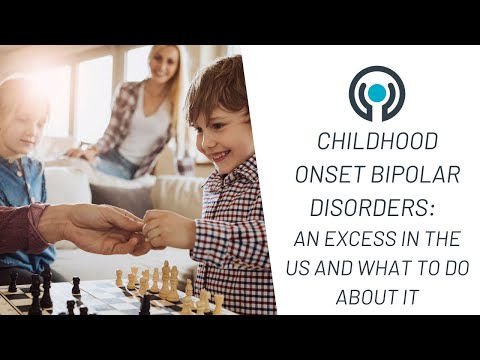 In this clinical webinar, Dr. Robert Post reviews and explains the data behind there being a higher incidence of childhood onset bipolar disorder in the United States than in Germany, the Netherland, and many other European countries. Bipolar disorder in the US runs a more difficult course in the US than in Europe. Earlier recognition and preventative treatments are needed to head off illness progression and treatment resistance. When a review of the variety of medications, their mechanics, and comorbidities is done, better effectiveness can be achieved even with fewer side effects.

Robert M. Post, MD is a member of IBPF’s Scientific Advisory Board, part of the Bipolar Collaborative Network in Chevy Chase, MD, and was a Clinical Professor of Psychiatry, George Washington, School of Medicine. Dr. Post graduated from Yale University in 1964, the University of Pennsylvania School of Medicine in 1968, and interned at the Einstein School of Medicine in 1969. His Psychiatry residency was completed at the Massachusetts General Hospital, NIMH, and George Washington University. He was Chief, Biological Psychiatry Branch for many of his 36 years at the NIMH where his research focused on better understanding and treating patients with refractory unipolar and bipolar illness. His group has won major awards from the Society of Biological Psychiatry, APA, ACNP, Anna Monika Foundation, NARSAD, NDMDA, NAMI, ACP, ISBD, and the CINP. He is on multiple editorial boards and has published more than 1,070 manuscripts. He is the: author of a book entitled “Treatment of Bipolar Illness: A Casebook for Clinicians and Patients”; and editor of the Bipolar Network News (BNN), a quarterly free newsletter available online at www.bipolarnews.org. He founded the Childhood Mood Disorders Initiative, which allows parents to weekly rate their child’s severity of anxiety, depression, ADHD, oppositional behavior, and mania so these can be printed out and taken to their treating physician.