Development of novel therapies for mood disorders: Something old, Something new, Something borrowed . . . Not So Blue? 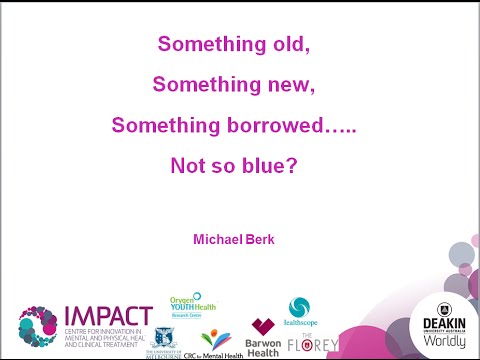 ***Please note, the audio is difficult in the begginning, but improves at around 25 minutes into the presentation*** Substantive breakthroughs in the understanding of the neurobiology of psychiatric disorders have not resulted in the expected development of effective therapies. For the past half century, drug discovery has largely focused on the monoamine systems. There is however abundant evidence that inflammatory and oxidative processes, altered neurogenesis and mitochondrial dysfunction play a role in the genesis and neuroprogression of mood and psychotic disorders. There is evidence of increased inflammatory activity, oxidative stress, mitochondrial dysfunction as well as altered neurogenesis in most major neuropsychiatric disorders. The consequences of inflammatory and oxidative stress include lipid peroxidation, DNA fragmentation, telomere shortening, protein carbonylation, reduced neurogenesis and an increased vulnerability to apoptosis. Inflammatory and oxidative stress can lead to decreased BDNF and other trophic factors. In sum, these processes can further damage neurocircuitry and may lead to progression of these disorders. Therapeutically, many known and available agents have robust actions on oxidative stress, inflammation, mitochondrial dysfunction, neurogenesis and apoptosis, suggesting an entirely new range of therapeutic possibilities. Many of these have established tolerability and safety profiles. The agent for which the largest amount of data is currently available is N-acetylcysteine. Positive placebo controlled data is currently available in schizophrenia, bipolar disorder, depression, smoking cessation, cannabis abuse, obsessive compulsive disorder and autism. Why this agent should be useful in such a diverse range of seemingly disparate disorders and what its mechanism of action is, remains uncertain. In addition, while some of these findings are replicated, many are preliminary and await replication. Agents targeting inflammatory pathways additionally show promise. These include aspirin, minocycline, infliximab, celecoxib and statins, with largest current database for the latter two. Mitochondrial dysfunction also offers druggable targets. Lastly, some agents such as aspirin may have as preventive potential as part of integrated preventive programs targeting non-communicable disorders. These findings not only offer the promise of novel treatments, but serve as proof of principle of the role of inflammation and oxidative stress in the pathophysiology of major psychiatric disorders.

Professor Michael Berk is currently a NHMRC Senior Principal research Fellow, and is Alfred Deakin Chair of Psychiatry at Deakin University and Barwon Health, where he heads the IMPACT Strategic Research Centre. He also is an Honorary Professorial Research fellow in the Department of Psychiatry, the Florey Institute for Neuroscience and Mental Health and Orygen Youth Health at Melbourne University, as well as in the School of Public Health and Preventive Medicine at Monash University. He is past president of the International Society for Bipolar disorders and the Australasian Society or Bipolar and Depressive Disorders. He is an ISI highly cited researcher who has published over 750 papers predominantly in mood disorders.  His major interests are in the discovery and implementation of novel therapies, and risk factors and prevention of psychiatric disorders. He is the recipient of a number of grants, including National Institutes of Health (US), Simon Autism Foundation, NHMRC CRE and project grants, Beyondblue, Stanley Medical Research Institute awards and is a lead investigator in a Collaborative Research Centre.