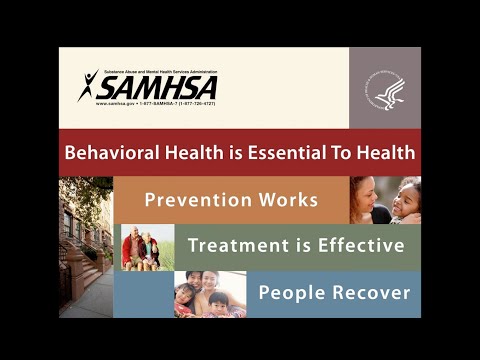 This webinar, presented by Dr. Richard McKeon, discusses preventing suicide among persons with bipolar disorder and highlights SAMHSA’s resources for suicide prevention and how they can be accessed.

Tell us what you think! After you’ve watched the webinar, please take our follow-up survey: http://survey.constantcontact.com/survey/a07ed7838i5it0jlcue/start

Every 15 minutes, someone in the U.S. takes his or her own life. And for every one suicide, there are 25 attempts. This public health issue affects everyone: families, healthcare providers, school personnel, faith communities, friends, government, and others. It’s important that everyone know suicide’s warning signs and how to help a person contemplating suicide (Substance Abuse and Mental Health Services Administration or SAMHSA, SAMHSA.Gov).

The information contained in or made available through this webinar cannot replace or substitute for the services of trained professionals in the medical field. We do not recommend any specific treatment, drug, food or supplement. International Bipolar Foundation is not intended to be a substitute for professional medical advice, diagnosis or treatment. Always seek the advice of your physician or other qualified health provider with any questions you may have regarding a medical condition. Never disregard professional advice or delay in seeking it because of something you have read or received from International Bipolar Foundation.