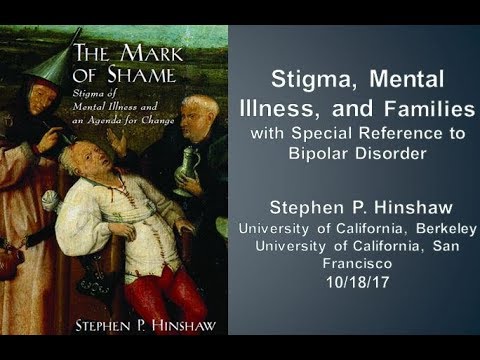 tigma is an ugly word, referring to an ugly topic–the shaming of people in groups deemed unworthy or unfit. Tragically, individuals experiencing mental disorders have continued to receive strong stigma across the millennia, continuing to the present. Professor Hinshaw defines stigma, discusses reasons for the continuing stigma of mental illness–ranging from social to evolutionary perspectives, covers the important concepts of ‘self-stigma’ and ‘courtesy stigma,’ and discusses both research evidence and cultural practices that demonstrate the presence of mental illness stigma. Intriguingly, although public knowledge of mental illness has grown considerably in recent decades, public attitudes have not followed suit. He then covers reasons why individuals with bipolar disorder maybe prone to receiving stigma. He closes with a personal and family narrative, discussing my father’s severe, lifelong bipolar disorder, which was highly stigmatized–and the doctor-ordered family silence surrounding the issue when I grew up. His recent book, “Another Kind of Madness,” graphically conveys such information, along with strategies for removing this pernicious stigma.

Stephen Hinshaw grew up in Columbus, Ohio and attended Harvard and UCLA. A professor of Psychology (UC Berkeley) and Psychiatry (UC San Francisco), he is an international presence in clinical psychology/mental health, with over 320 articles/chapters and 12 books. He received a Distinguished Teaching Award in 2001; his Teaching Company (‘Great Lecture’) series, “Origins of the Human Mind,” appeared in 2010. He has been recognized by the Distinguished Scientist Award from the Society for a Science of Clinical Psychology (2015), the James McKeen Cattell Award from the Association for Psychological Science (2016) for a lifetime of outstanding contributions to applied psychological research, and the Distinguished Scientific Contributions to Child Development Award (2017) from the Society for Research in Child Development. He lives in Berkeley, California, with his wife Kelly Campbell; they have three sons. His newest book, “Another Kind of Madness,” chronicles his father’s recurring mental illness and the doctor-enforced silence surrounding it, plus the huge need to combat stigma. (http://stephenhinshawauthor.com/)