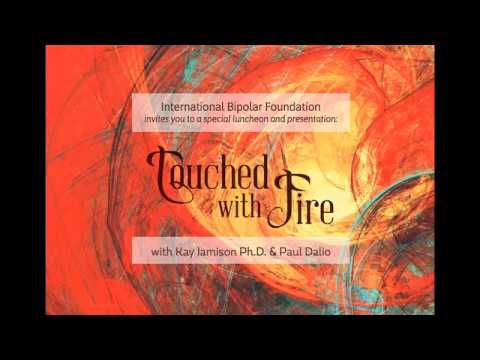 Paul Dalio tells the story of his first experience of mania, and how his experiences with bipolar lead to the development of his film, “Touched with Fire”. Through sharing his story, Paul illustrates the important need for a change in how we, as a society, discuss mental health. Paul began studying Screenwriting at age 20 at the NYU Tisch School of the Arts. While there, Paul met his professor Spike Lee who became his mentor and executive producer on his feature debut, “Touched with Fire,” starring Katie Holmes and Luke Kirby. Paul wrote, directed, scored and co-edited the film, which premiered in 2015. It received the SAMSHA Voice Award and was a New York Times Critic Pick.

Kay Redfield Jamison, PH.D. shares a message of hope, courage and character. Kay Jamison is the Dalio Family Professor in Mood Disorders and Professor of Psychiatry at the Johns Hopkins School of Medicine. She is the author of several books, including An Unquiet Mind and Touched With Fire, and co-author of the standard medical text on bipolar illness. She is the recipient of the Lewis Thomas Prize, the Sarnat Prize from the National Academy of Medicine, and a MacArthur Award.