Bipolar disorder can strike anyone, regardless of gender, race, education, or class, from pre-teens into our sixties. It is an equal opportunity disorder and can, at its worst, destroy lives and health, marriages and families, careers, friendships, finances, and more.

Deciding to publicly share my bipolar disorder story is a serious matter, but something I had to do. I argue that seeking mental health treatment should be destigmatized and dealt with the same way our culture deals with cancer, diabetes, or a broken leg. With physical illnesses, we tend to recognize the symptoms, get medical help, recover, and get on with our lives. We don’t (usually) blame or shame the sick or injured person for their malady. In most cases, we love, support, and help them get well.

Yet with mental illnesses, we often wait for people to fail before we get them the help they need. How is it that failure—often with permanent family, legal, social, career, or academic consequences—tends to be the first and only indicator of brain maladies? How can we change this?

In my view, we need more scientific research on bipolar disorder and other mental illnesses, brain health broadly, and the “invisible wounds of war.” We must identify the genetic early warning markers, find the causes, understand the disease mechanisms, and develop preventive medications and better recovery treatments. We need earlier identification of symptoms and even potential cures. This research is vital for our society—especially, I believe, our veteran population and our serving military.

Moreover, how can we accommodate people who have these maladies so they can continue their careers? There are some examples of the medical and academic professions finding ways to do so. Professor of psychiatry Kay Redfield Jamison of Johns Hopkins University, for example, has suffered from severe bipolar disorder for decades, yet figured out how to manage it and perform at a world-class level as both a psychiatrist and a scholar. Could other professions perhaps follow suit? 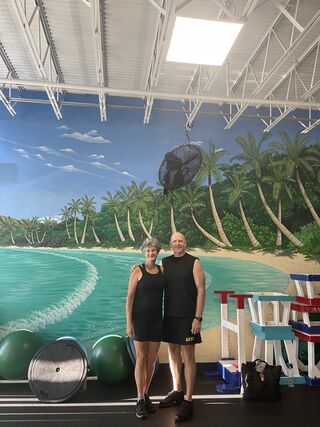 Maggie and I at our community fitness class
Source: Gregg Martin

Millions continue to suffer. Worse still, their suffering is compounded by the stigma many members of our society continue to attach to brain maladies. By some grim coincidence, I found myself finally healthy enough to begin to tell my story during the worst public health crisis of our time. But even when the pandemic is over, our mental health crisis will remain, and even appears to have worsened.

What You Can Do

If you or someone you love is demonstrating the warning signs of bipolar disorder or another serious mental illness, go get medical help immediately. Engage your medical professionals—understanding that bipolar is difficult to diagnose, can blend in and interweave with other brain maladies and personality traits, and can take years to properly diagnose and treat. Read, study, and learn all you can about bipolar and mental illness in general. Engage fully in this effort. Knowledge is power.

Once you are prescribed medication and treatment, stick to it and maintain an informed dialogue with your doctor and therapist. Steel yourself to be compliant for life. Bipolar disorder never takes a break, and neither can you. Like me, you may find yourself in a “forever war” that you cannot quit or walk away from, without potentially disastrous results. 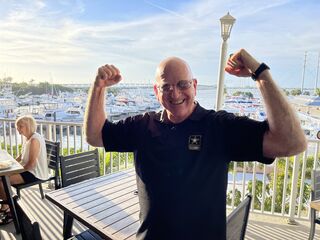 Be strong and help stop the stigma!
Source: Gregg Martin

The good news, though, is that bipolar disorder is a treatable medical condition. With proper treatment and a determined attitude, it’s possible for many people with bipolar disorder to live successful, happy lives.

It takes courage and strength to admit you need help, to get it, and to walk the road to recovery. I am not ashamed or embarrassed to be a bipolar survivor and thriver. In fact, I am thankful and proud to have survived this toughest of battles—with the support of my wife, family, friends, the VA, and grace—and to be thriving once again, with the unexpected gift of a great new life.

A version of this article also appears in Task & Purpose.

Part I discussed the onset of my bipolar disorder, surge into full-blown mania, removal from command, three medical misdiagnoses, and crash into depression and psychosis.

Part IV delved into my journey of recovery and living with bipolar disorder.

2. NIH Suicide attempts in bipolar I and bipolar II disorder: a review and meta-analysis of the evidence